In true Davis style, Jason biked into work this morning for the first time. He accidentally went the long way, so what should have been 4.5 miles to campus was probably more like 6, but thankfully he didn't have a meeting or class scheduled so wasn't late for anything. There's a heat wave this week (over 100 degrees all week), so that's a bit of a challenge but it should work out just fine. 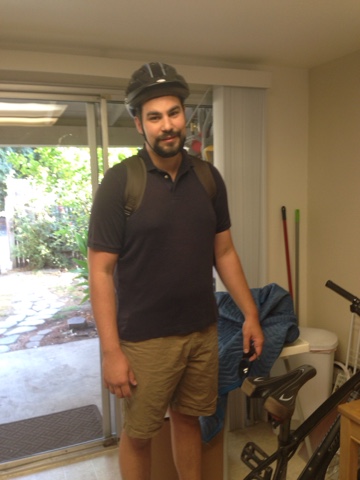 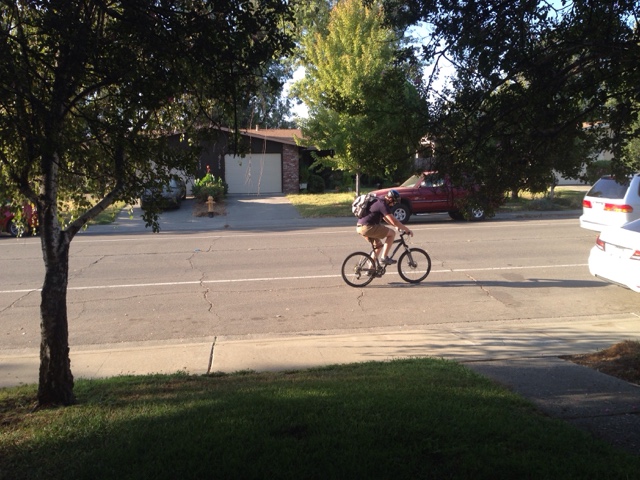 Amaryn, Teá, and I watched from the front porch and both girls thought it was pretty entertaining to watch him ride by. 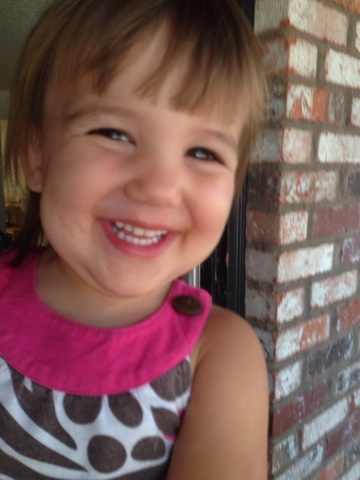 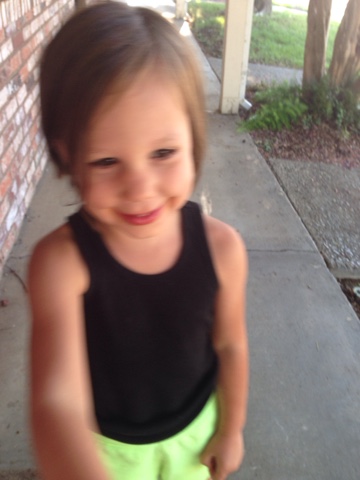 We've been here about a week and a half now, and about a half a week in our apartment. It's been exhausting unpacking and getting settled but we are managing just fine. There's been hard days and lots of missing CT and loved ones, but with each challenge or feelings of home sickness, we turn to Jesus and thank Him for His plan and goodness. Jesus, we trust in You!! 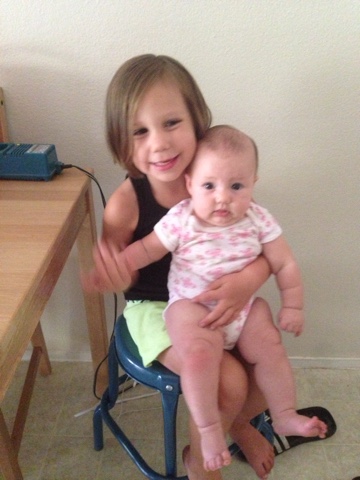 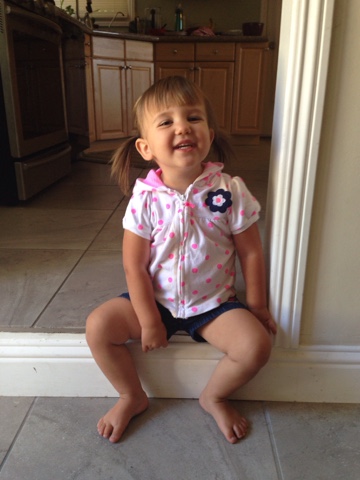 What has been a huge blessing in CA however is spending time with my sister and nephews! I haven't been snapping many photos but we are truly enjoying and soaking in our time with them. With 5 kids 4 years old and younger, it's pretty loud and chaotic, but oh so much fun! 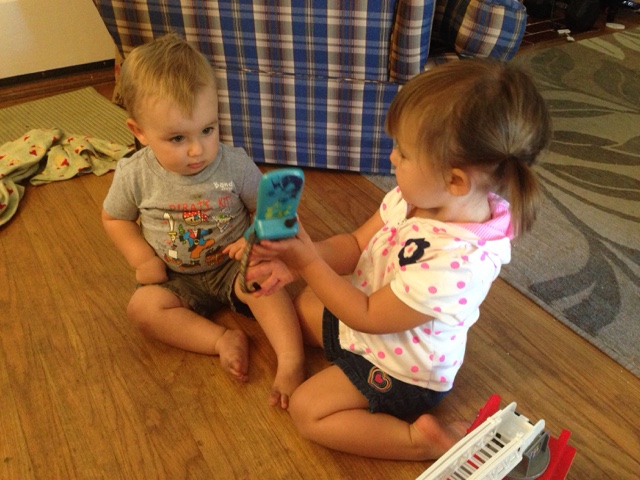 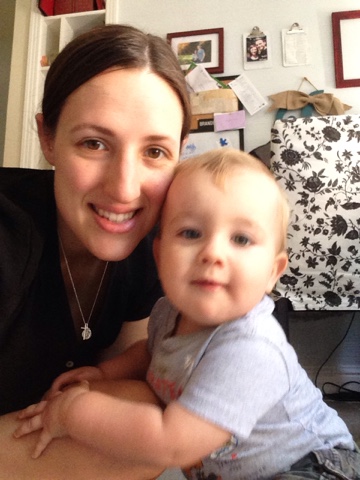 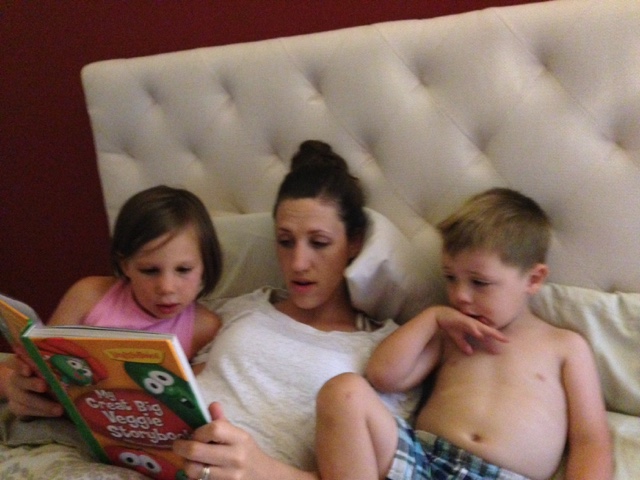 Teá begins her Catechesis of the Good Shepherd classes this week. We've been twice already for parent and child orientations and I'm so excited for this Montessori based approach to catechism. The kids meet in what's called an atrium and spend a couple hours, once a week, exploring the atrium and learning all about our faith and, as Teá told me, "being quiet so we can listen to God". How thankful I am that she will be exposed to the value and necessity of quiet in our life! It's so contrary to the loud, distraction filled culture we live in! In The Holy Spirit is the true catechist. I saw the atrium today during the parent meeting and I could feel Gods presence there and it brought tears to my eyes. I'm so grateful for the beautiful and rich teachings and truths that Teá will be further exposed to here and for all I will learn with her on this journey.
Tonight we feel a bit more homesick. What's been going through our heads over and over...Jesus, we trust in You! There's a lot of change happening in our family right now between a new location, job, member of our family, living situation...I could go on and on, but it's hard and our emotions range from feeling overwhelmed, hopeful, sad, excited, tired, unsure. It's amplified when we see our beautiful children sad and missing CT and family there. Today Teá said she missed CT and asked when we will be going back. I said, Lord willing we will visit next summer. She gasped and said that's a long time away. It's really is. Amaryn cries when seeing them on FaceTime and says names of family members in CT wondering where they are. She brought photos of CT family up to her room last night and I could tell she was missing them. She can't quite verbalized it but it's obvious she's struggling with it all. It's just so hard. I'm thankful my family is close by and am really enjoying this time with my sister. We just wish everyone lived in one place!
And with all that we are learning a deeper level of trust and of steadfastness. We want our faith to be consistent, steadfast, and unwavering. Our circumstances will be what they be, but our God is GOOD and faithful and loving and here with us in ALL of it. In our happiness, He is there. In our sadness, He is there. In our pain, He is there. In our uncertainty and doubt, He gently reminds us to trust Him and gives us the grace to trust and be certain in HIM. Not in anything else. Our location has changed, but our foundation in Jesus has not, and it grounds and stabilizes us and gets us through each day.
Posted by Chelsee at 12:53 PM No comments:

We left Torrey and drove South on a scenic byway to Bryce. The drive was beautiful and a little frightening. Part of the drive had steep cliffs on both sides of the road at the same time, along with curves and steep grades. It was cool to look over and see hawks flying parallel to us soaring through the sky overlooking the ground beneath the cliffs. It was desolate, but in a beautiful way.

Teá rode with Papa and Grandmere, and Amaryn didn't seem to mind a bit.

We checked into the hotel for a little break from the car, and then headed out to visit Bryce Canyon National Park. The park is so unique and unlike others. It isn't a true canyon as there is no river forming the trenches below, but it nevertheless looks much like one. We drove through the park and stopped at difference overlooks and walked a couple short trails.

The end of the park road lead us to a beautiful lookout at an elevation of over 9,000 ft. The sun was setting on the canyon hoodoos and made for a spectacular view. The sunset was once again absolutely jaw dropping gorgeous.

We spent quite a few days in Utah, and finally it was time to leave and head to the Grand Canyon in Arizona. The drive took us through indian reservations and more desert.


Not long after entering into the Grand Canyon National Park it began to rain. It was a hazy evening, but that view. The camera doesn't do it justice. It's remarkable and even with our own eyes looking at it, it was hard to fathom the grandeur of the canyon. It's bigger than our minds can truly comprehend. I can't help but wonder in awe at the God who created it. How big, vast, and grand HE must be!!


We climbed a tower at one of the lookouts. It gave us a quick break from the rain and provided a nice view.


At points the canyon stretches 18 miles from one rim across to the other and is over a mile deep. In all honesty, it was frightening with children. Not all of the overlooks are fenced in. Even for the ones that are fenced in, only a few short feet away you can go around the fence to where it drops off suddenly. We talked with a park ranger who told us that just about daily they have to make helicopter rescues into the canyon for people who began trailing down into it and couldn't make it out. He had seen people die, often because of trying to photograph themselves and the canyon and then losing balance and falling. It isn't too uncommon, so we kept our distance, remembered our mortality, and kept our little ones close!


That evening, we put the kids to bed in the hotel room and my parents watched them while Jason and I were able to go out and watch an IMAX presentation on the Grand Canyon. It felt a little funny bringing a baby into an IMAX theater at 8pm, but we enjoyed ourselves and the mini-date nonetheless!

We began the morning with a visit to the Grand Canyon once again. Dense fog was rising out of the canyon and we couldn't even see a few feet across, let alone to the other side of the canyon. We walked around the visitors center and checked back and the fog had lifted.


We drove to Boulder City and made a quick stop at the Hoover Dam along the way. Our hotel happened to be a casino (welcome to Nevada) and Teá was most impressed with the slot machines. She excitedly asked us, "Look at all the shiny lights over there, can we go there and play with those?! That's where the party is!" Jason took the two older girls swimming in the pool instead.

The next part of the drive was DESOLATE! Not in a pretty way, either. We both agreed we don't like Nevada very much. We stopped outside Death Valley at a candy shop...the only decent stopping point for miles and miles. It wasn't very pretty and it just felt dirty. Probably the casinos and brothels on the side of the highways contributed to these feelings. We also were so ready to finally get to California by this point and Nevada was between us and home.

FINALLY!!! The last day of the road trip. We enjoyed ourselves and the scenery, but were very thankful to have reached the destination. Well almost...our apartment in Davis wouldn't be ready for another week. BUT, after 4,260 miles and 15 days in a car, we were so grateful to be almost there. Plus, my sister and brother-in-law were super generous to host us and it was fun visiting with them for the week. The kids were thrilled to be able to play with their cousins and their cousins toys. They loved not having to be limited to the confines of a vehicle, and enjoyed playing outside, inside, basically anywhere besides a car or a hotel room.

Prior to leaving CT, I took great care and time to organize the car and make it road trip ready.

After each day, we would take out the trash, put away the childrens activities from the day, and re-organize the car. Even so, after two weeks in the car with three kids and multiple food and coffee stops, the car was doomed and ended up looking like this:

Our car was as thankful to finally get there as we were.
Posted by Chelsee at 11:44 PM No comments:

Chelsee
Wife, mother, catholic convert, runner, dark chocolate lover, stay at home mom trying to pursue Jesus in all I do. A simple life appeals to me and I strive to be faithful in the small, sometimes tedious, but always worthwhile, moments of daily life.

"Our lives for the most part are made up of little things, and by these our character is to be tested...little duties carefully discharged; little temptations earnestly resisted with the strength God supplies; little sins crucified; these all together help to form that character which is to be described not as popular or glamorous, but as moral and noble."
~ Fulton J. Sheen

"Marital love is a reflection of how God loves. It is free, total, faithful, and fruitful."
~Christopher West